The future of meteorology

Bob Riddaway, the president of the European Meteorological Society (EMS), is convinced that in the future more detailed and accurate weather forecasts will help farmers make business decisions. Although climate change will continue to be a challenge for them, as more heat waves, fewer cold spells, and increases in heavy rain events as well as floods and droughts are more likely to occur.

The EMS network consists of 38 Member Societies. What led to the establishment of the EMS?

Since the establishment of the EMS, what are the most significant developments in the science and application of meteorology?

In the last twenty years there has been continued improvements in the accuracy of weather forecasts and the value of climate predictions based on advances in technology and science. In particular, there have been increases in high-performance computing power, the number and type of observations (particularly from satellites), the resolution and complexity of forecasting and climate models, and the use of ensembles to provide an assessment of the uncertainty in a forecast. Nowadays major weather patterns are usually predicted more than a week ahead and small-scale severe weather events are often forecast with sufficient lead time for mitigating action to be taken. Also, the climate models are able to provide predictions that help policy makers make informed decisions about mitigation and adaptation policies.

Extreme weather will always be with us – can local events still take us by surprise?

Though many extreme events are rare, they can cause death, disruption and destruction, and adversely affect livelihoods. So it is important to provide warnings of such events. The forecasting of extreme events such as heavy rain and flash floods (i.e. floods caused by heavy rain over a short period) has improved over the years. For example, accurate short-range local forecasts of heavy rain can be provided using a combination of radar, which shows the current location and intensity of rainfall, and fine-mesh regional models. Also using these forecasts as input to hydrological models allows predictions of flash floods. In general, there are now fewer surprises about the extent, duration and intensity of the occurrance of heavy rainfall and flash floods.

Is it possible to forecast large-scale extreme events such as heat waves, cold spells and floods?

Forecasting models, such as the one used by the European Centre for Medium-range Weather Forecasts (ECMWF), can be used to provide monthly forecasts which show the difference between the forecast temperature and the models's climatology. This approach can give an indication of heat waves and cold spells up to about two weeks ahead. Also the Copernicus Emergency Management System (CEMS), funded by the EU, provides early warnings of natural and man-made disasters such as floods, fires and droughts. One of the components of CEMS is the Global Flood Awareness System (GloFAS) which couples weather forecasts with a hydrological model to provide a daily forecast of upcoming floods for the next 30 days along with an indication of unusually high or low river flow up to 16 weeks ahead.

What link do you see between the frequency and intensity of these events and climate change?

The Intergovernmental Panel on Climate Change (IPCC) has indicated that there has been a global warming of about 1.0°C above pre-industrial levels caused by human activity. Also, future man-made emissions will continue to cause climate change, including rises in sea level. In the view of the IPCC there are many benefits in limiting global warming to 1.5°C. Even if this is achieved it is expected that there will be an impact on extreme weather events. The evidence from models used to simulate the climate is that increases in man-made emissions (including greenhouse gases and aerosols) are likely to lead to more heat waves, fewer cold spells, and increases in heavy rain events, floods and droughts. In general, the impact of climate change on extreme weather varies across regions, seasons and timescales.

Is it possible to link a specific extreme weather event to climate change?

Usually it is not possible to make a judgement about whether a specific extreme events is caused by climate change. However, in Siberia between January and June 2020 overall temperatures were 5°C above average. Also there was a record maximum temperature for the Arctic of 38°C. Researchers from international universities and meteorological services came to the conclusion that this extreme would have been almost impossible without climate change caused by human activity. Indeed, it is estimated that the prolonged high temperatures in the Arctic would happen less than once in every 80,000 years without human-induced climate change. It might be that in future this kind of attribution could be possible for smaller-scale events.

As you know farmers rely very heavily on short- and long-term forecasts, how will recent and foreseeable advances in climate-science and meteorology benefit them?

Weather forecasts can help farmers maximise production. For example, they can be used to identify weather windows for key activities, such as crop spraying and harvesting, and provide warnings about weather that might adversely affect crops, livestock and the safety of workers. Also, historical meteorological data can be used to quantify the links between agricultural outputs and the weather. There is no doubt that in the future the detail and accuracy of weather forecasts will continue to increase, and this will be of benefit to farmers in making operational decisions. Additionally, there has been an EU initiative called the Copernicus Climate Change Service (C3S) that provides information about the past, current and future states of the climate. Amongst the many sectors that benefit from its products are agriculture and forestry.

In your opinion, what are the biggest upcoming challenges for meteorologists in the next few years?

The challenges include strengthening the ability to give warnings about extreme weather, increasing the value of weather information for the public and the economy, and enhancing the provision of climate information for policy makers. To address these challenges, it is necessary to take advantage of new technologies, focus on sustaining and developing an integrated Earth-system observing network, and advance the scientific knowledge of the Earth system to improve predictive skill. Progress can be enhanced by the private, public and academic sectors working together to support the provision of accurate and reliable weather and climate-related information and services – this is referred to as the Global Weather Enterprise (GWE). It is expected that the activities of the EMS will contribute to the GWE and continue to support the European meteorology community. 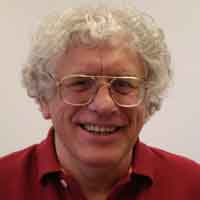 Bob Riddaway is the President of the European Meteorological Society (EMS). The EMS is an association of meteorological societies that aims to promote the advancement of the science, profession and application of meteorology and related sciences within Europe for the benefit of the whole population. In 2003 he became chair of the EMS Publication Committee and a few years later also took on the role of representative of the UK's Royal Meteorological Society on the EMS Council. He was EMS Vice-President between 2008 and 2015, and in 2017 he was elected to serve a three-year term as EMS President.

The most beautiful cloud formations to marvel at