Blockchain in agriculture: chain of trust

The blockchain has become known through cryptocurrencies like Bitcoin. The technology can also make value chains in agriculture more transparent – from producers to distributors to consumers.

Did the fish on your plate really come from the wild and not from a fish farm? Is the soya feed delivered for the dairy cows really genetically unmodified? Are the apples in the supermarket really from New Zealand and really organic? Increasingly, farmers, traders and end consumers are demanding reliable proofs of origin and seamlessly traceable freight routes for foodstuffs. The corresponding certifications are anything but easy, because often the products have travelled far and have passed through many hands. In some circumstances, the journey may involve tens of thousands of kilometres of freight travel and sometimes there may be 50 or more intermediate stops: warehouses, food processors, logistics providers, wholesalers and retailers. The result of long distances and many processing steps is too much anonymity in the value chain.

So what should be done if processors or consumers want to know which ingredients come from organic farming, whether they are fair trade? And how can we ensure that the sacks, crates and packages contain what is written on them? In a globalised merchandise management system, who can guarantee proof of origin and transparent freight routes and ensure compliance with quality standards? 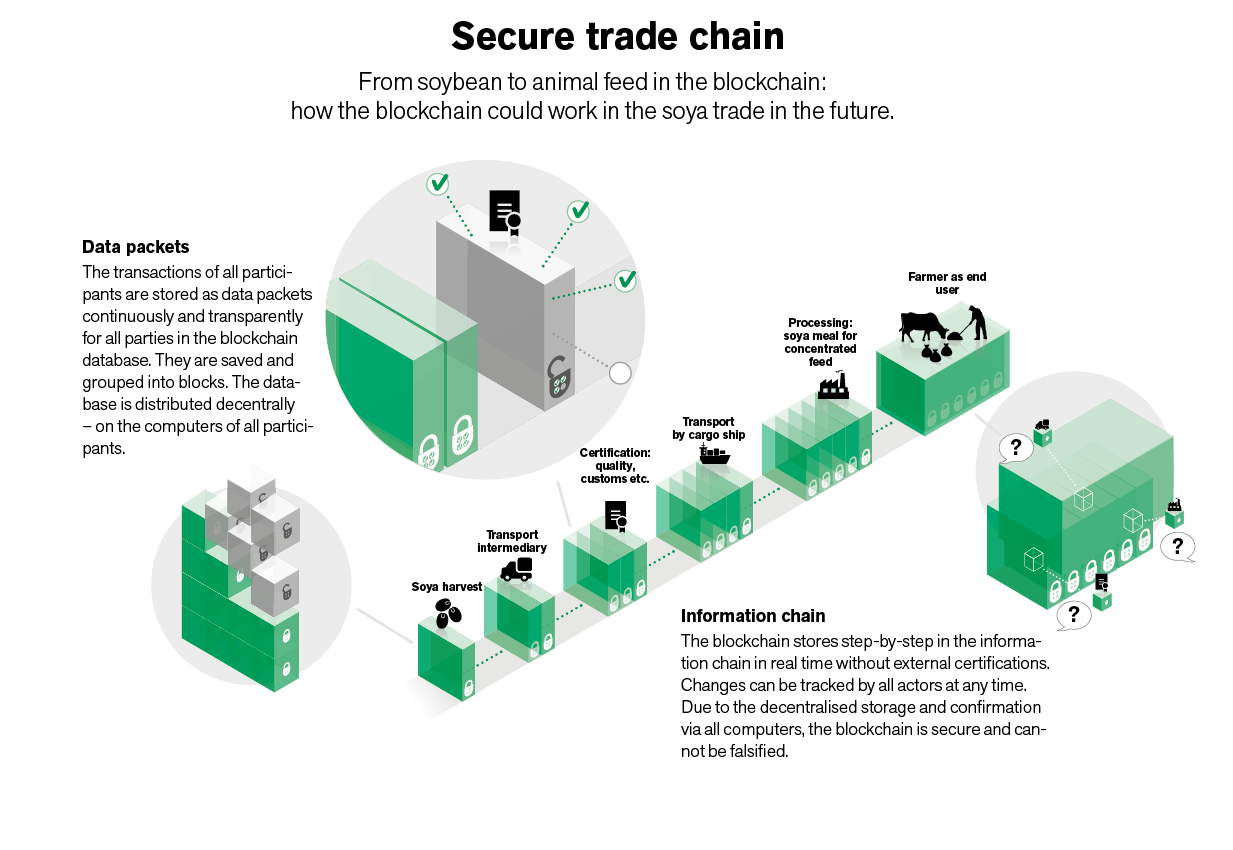 One very promising answer to these questions is the use of blockchain technology in agriculture and trade. This technology is known to the wider public primarily from the field of digital cryptocurrencies such as Bitcoin. In fact, the blockchain can be used wherever digital processes and transactions need to be designed in such a way that they are traceable for all participants. Any counterfeiting attempt by an actor in the process chain is then reliably detected.

A few details are needed to explain how things work: blockchain technology defines a database structure in which a transaction is only entered irrevocably when more than half of the actors involved, such as producers, freight companies, traders or banks, have given their consent. The percentage varies in previous implementations, but is always above 50 percent. Once an entry has been made, it can no longer be changed. As a result, the blockchain forms a chain of trust that all actors have stored on their computers. Decentralised storage means the individual consents of the parties involved do not have to be managed centrally. Higher authorities, for example a notary, an public authority or a certification company, are no longer necessary. In this way, products can be recorded quickly and accurately despite the sometimes very long distances to the processor or end user and despite the many intermediate stops with regard to origin and freight routes. The decentralised database structure means origin and freight routes can be documented in such a way that the corresponding information for each actor can be viewed on their own computer and checked locally. Nobody can tamper with the data afterwards.

Agriculture 4.0 has arrived on farms

Blockchain technology has integrated the factor of trust into the process itself; it does not have to be supplied from outside. It can thus make a decisive contribution to the digitalisation of agriculture and global trade flows.

Farmers, logistics providers, traders and consumers can benefit greatly from the blockchain technology. Surveys conducted by the research department of the IT industry association Bitkom e.V. show that digitalised agriculture has long since arrived on farms. More than half of the farmers surveyed already rely on digital applications in hardware such as GPS-controlled agricultural machinery and software such as digital farm management. For 2030, 49 percent of the farmers in the Bitkom study forecast self-driving agricultural machines, 43 percent autonomous field robots, 44 percent digital farm management and 45 percent autonomous drones.

Meanwhile the blockchain working group has initiated a study project "Blockchain Tech in Germany", which is being conducted by Bitkom Research GmbH. The project started in July 2018. The study aims to show the status quo on the one hand, but also the lines of development and the effects of blockchain and similar approaches using decentralized, "distributed" databases (also called distributed ledger technologies) in Germany.

Blockchain and distributed ledger technologies are creating new opportunities not only for traceability and freight tracking, but also for large commercial businesses, especially with agricultural products.

In the global soybean trade, the first transactions have already been carried out on a blockchain basis. The sellers, buyers, government and certification bodies as well as the banks, which support the transaction financially on the seller and buyer side, were "bound together" in the blockchain. According to the companies involved, the blockchain enabled them to reduce the time required for the complex process, which is characterised by the exchange of many documents which need authentication, from five to ten days to 24 hours.

Whether more transparency for the end consumer or significant savings in process times and costs: blockchain and distributed ledger technologies could decisively shape the future of agriculture and trade.