Using Artificial Intelligence (AI), robots conquer the most diverse areas of life: industry, medicine, logistics, space research or agriculture. AI is on the advance and will continue to help people in the future. We show how.

Sophia stands on the red carpet and smiles, pulling her eyebrows together, winking at her audience and giving one interview after another. She's an international star in demand. Her face has already adorned the cover of Vogue – no wonder, as it radiates a touch of Audrey Hepburn. She has even talked to Angela Merkel and was a guest at the United Nations. But she is not even five years old yet, never sleeps, never eats and never cries. How so? Sophia is the humanoid robot of a Hong Kong company. She acts and communicates in a very human way using artificial intelligence. The mechanical media star embodies the intelligent robot par excellence, an image shaped by science fiction that most people have in mind when they think about robots. But machines like Sophia, artificial communication partners for humans, are still an absolute rarity, and their use in everyday life is currently a pipedream.

industrial robots were sold worldwide according to statistics from the International Federation of Robotics.

the first humanoid robot presented itself at the New York World's Fair: It was the two-meter robot "Elektro" from Westinghouse.

Robotics has developed into one of the leading future technologies, especially in industrial applications. It combines approaches from mechanical engineering, electrical engineering and information technology and covers a wide range of industrial sectors: from design, control and production to operations. Outwardly, industrial and service robots are difficult to distinguish from other machines, but their functions extend far beyond that. At the moment, their development is rapid. The degree of automation of robots in the form of Advanced Robotics continues to rise, as confirmed by a Boston Consulting Group study. 'Advanced' here means that the robots used in production and logistics are equipped with self-learning programs and execute processes autonomously. They recognise mistakes and correct them. Modern sensor technology optimises their perception. Their programming is based on simulation software and is flexible and self-learning. They continuously adapt to varying processes and tasks inside a virtually networked production system with real-time data. Thanks to this form of AI, they are more agile and mobile: for example, they move autonomously in production halls. This enables them to drastically reduce machinery downtimes and faulty components, for example. In the coming years, it should be possible to realise the vision of the future of a factory that runs itself using robots.

The future market for robotics

The technology is in great demand internationally: the market for advanced robotics is expected to grow worldwide by a total of 46 percent by 2021 and to reach a volume of 3.7 billion US dollars in production alone. The summary of the Boston Consulting Group study: 86 percent of the 1,300 respondents from international companies plan to implement advanced robotics over the next three years. India, China and Poland are the world leaders: almost all companies here want to invest in advanced robotics. Germany ranks fourth with 92 percent of respondent companies. All study participants agree that they would like to increase their level of automation by 15 percent by 2025, for example for simple manual routine tasks such as loading and unloading machines. For 2017, the International Federation of Robotics, the umbrella association of the robotics industry, recorded an increase in sales for the fifth year in a row, totalling a massive 30 percent. The largest customers were the metal industry with a growth of 55 percent and the electrical industry with a total of 33 percent more orders.

Agriculture is another of the key industries in robotics. According to the International Federation of Robotics, by 2014 around a quarter of global orders for service robots came from farmers. 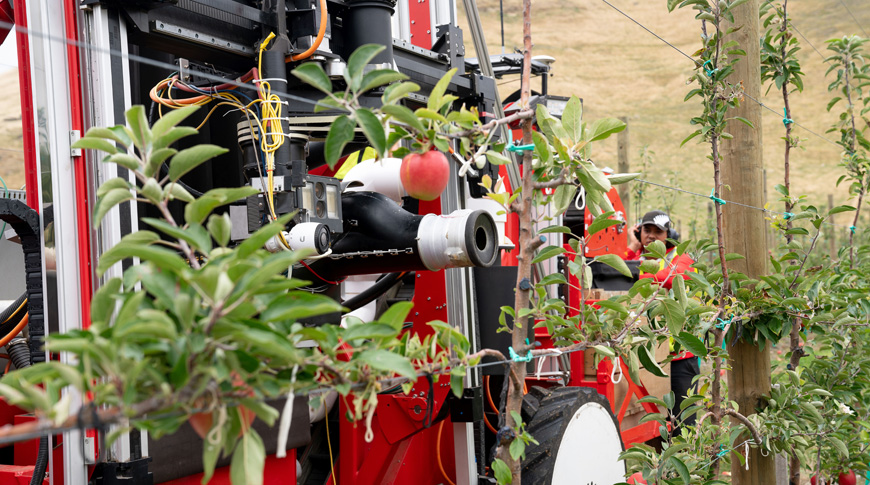 The fully automatic picking robot of the start-up Abundant Robotics identifies ripe apples by means of a sensor and sucks them off one-by-one via a hose.

This is not surprising, since robots are used in a wide variety of areas, as they increase efficiency in most cases and can save costs. They often cannot be surpassed in speed and precision while at the same time producing few errors. The key industry with the longest tradition in robotics is car manufacturing: robots have been used here for more than 50 years. For example, an industrial robot was involved in the production of the VW Passat model in the 1970s. In logistics, automated guided vehicles now transport goods from A to B in warehouses completely autonomously, making conveyor belts superfluous. These robots travel up to two meters per second and can transport loads of around 2,000 kilograms on their way. They are available as forklift trucks, tractors with trailers or as moving loading platforms. In operating theatres, robots assist in surgical procedures: using a joystick, foot pedals and a console, the doctor controls scissors, tweezers or an endoscopic camera with the aid of high-precision robot arms hovering above the patient. This low-risk, sparing method is often used for minimally invasive procedures in particular. A robot arm can make the smallest cuts of a tenth of a millimetre, never trembles and does not tire. Space research is also relying on robots – since November 2018, the NASA robot "InSight" has been using sensor technology to study the interior of Mars and record data on the temperature, seismological activities, surface structure and weather of the red planet.

Agriculture is another of the leading industries in robotics. With the help of automated steering systems and satellite control, tractors can now cultivate a field almost entirely autonomously. Swarms of compact robots the size of a vacuum cleaner, such as the Xaver system, can spread seed around the clock. As with all other smart farming applications, this works via satellite navigation and data management in the cloud. Precision farming systems also include drones that monitor plant growth, soil moisture and nutrient requirements, for example, and then apply fertiliser or pesticide. Digitalisation in agriculture is progressing daily: according to the International Federation of Robotics, by 2014 around a quarter of global orders for service robots came from farmers. In the future, these systems will use machine learning to improve all processes in the field in real time and increase harvest yields. However, there are areas in which automation is still difficult today, like harvesting apples. No two trees on an apple orchard are the same, the ground is often uneven or on a slope. In addition, apples are very sensitive to pressure and the fruits sometimes grow in hard-to-reach places. But now a robotic solution is being developed as a world first: at this year's apple harvest in New Zealand, the BayWa subsidiary T&G Global used a commercial picking robot in addition to human pickers for the first time.

It is a development by US start-up Abundant Robotics, in which the Munich-based group has held a stake since 2017. A variable-height tube is attached to the side of a special harvesting machine. It autonomously recognises the fruits and sucks every apple into a tube. The robot is specialised in picking at difficult to reach tree levels. This allows it to reduce the physical strain on employees and increase efficiency. BayWa expects that in about two years' time apples could also be harvested in German plantations with the help of this AI. The only condition is dense planting and specific tree pruning. This could significantly reduce costs in the manual labour-intensive crop, saving time and money.

„Robotics has become one of the leading technologies of the future, especially in industrial applications. It combines approaches from mechanical engineering, electrical engineering and computer science.“
„1939, the first humanoid robot was introduced to the New York World's Fair: it was the two-meter robot "Elektro" from Westinghouse. His vocabulary was already 700 words.“

Back to Sophia: humanoid machines that accompany and support people in their daily lives have been keeping clever minds busy for more than a decade. Leonardo da Vinci committed the idea of a "mechanical man" to paper back in the 15th century. His rich collection of drawn inventions included the construction of a mechanically movable knight's armour – hidden wheels, rods, rollers and cords inside the armour. As early as 1939, the first humanoid robot presented itself at the New York World Exhibition: it was the two-meter tall robot "Elektro" from the company Westinghouse. It has a vocabulary of 700 words.

What will the future look like? Clean the bathroom, take out the bins, clean out the dishwasher and cook something delicious: in around ten years, robots could already be doing a good deal of such everyday housework. In Japan, robots have been used in upkeep for years. Here too they can become useful everyday companions in the future. Surely one day we will work side-by-side with our robot colleagues. The only uncertain thing is when.

Blockchain in agriculture: chain of trust