More and more solar power plants around the world are generating climate-friendly electricity. And not only on roofs or on large open spaces. Calm bodies of water or building façades, for example, also offer plenty of potential. This has several advantages.

Sun, wind, water and biomass: Never before have so many people around the world worked on using renewable energies to make the energy supply more climate-friendly. At least 11 million people were employed in the industry in 2018, according to figures published by the International Renewable Energy Agency (IRENA) in June 2019 in its Renewable Energy and Jobs – Annual Review report. Around 60 percent of them work in Asia, but renewable energy is also regarded as an important job driver in the USA, Brazil and various EU states. The global trend is primarily affecting the solar industry: with 3.6 million employees, this covers one third of all jobs.

million employees are working in the solar industry, covering one third of jobs worldwide in the renewable energy industry.

Terrawatt hours of electricity generated renewable energy in 2017 worldwide - as much as 614 medium-sized nuclear power plants.

gigawatt (GW) of solar power was installed in 2017.

This is how solar energy is produced

The almost infinite potential of solar

In 2017, renewable energies generated 6,762 terawatt hours of electricity worldwide – as much as 614 medium-sized nuclear power plants. An enormous amount, considering that there are currently 450 such power plants worldwide. More than half of the renewable electricity comes from hydropower. However, experts assume that the use of water will decline in favour of other renewable energy sources. Solar energy in particular is on the rise: in 2017, solar power plants with an installed capacity of 99.1 gigawatts (GW) were newly connected to the grid. Which is 30 percent more than in the previous year. This means that in 2017 the total capacity installed worldwide exceeded the 400 GW limit for the first time.

At present, solar energy contributes two percent to the global electricity mix and would have to be significantly expanded to achieve the 1.5 degree target set by the Intergovernmental Panel on Climate Change, according to experts. Researchers at the University of Lappeenranta in Finland (LUT) and the Energy Watch Group (EWG) believe that this is possible. In April 2019, they published a study that puts solar energy at the forefront of a transition to 100 percent renewable energies and the associated electrification of all energy sectors by 2050. According to this, the mix of energy sources would consist of 69 percent solar energy, 18 percent wind power, 3 percent hydropower, 6 percent bioenergy and 2 percent geothermal energy. These calculations would far exceed the two-thirds share of renewables required by IRENA. 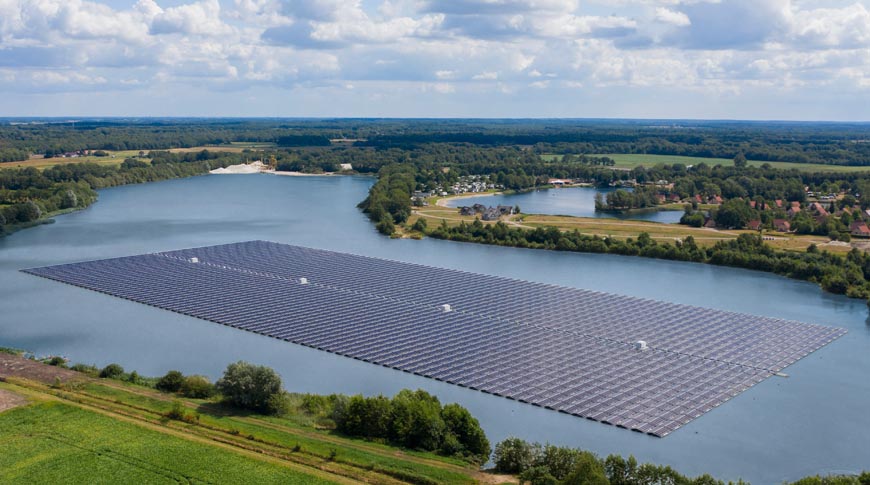 Currently, most photovoltaic systems are installed on roofs or open spaces, but this can change. Researchers and manufacturers are already working on using solar cells wherever possible, whether on trains, backpacks or lakes. Floating solar modules in particular are causing a stir. They are installed on calm bodies of water with floating substructures and ensure a slightly higher electricity yield by the water's cooling effect. In the Netherlands, BayWa r.e. has already completed three projects of this kind – floating solar plants – on commercially exploited expanses of water. The dual use of bodies of water can make an important contribution to existing land use conflicts in the future. BayWa r.e. is already working on other projects in this sector.

Entire buildings are also set to become energy suppliers – thanks to building-integrated photovoltaics. In this case, solar modules are not placed on the roof, but rather built into the building envelope, usually in façades where there is usually more space than on the roof. Modules integrated into the façade also protect against noise and weather and make better use of the radiation from a low sun in the morning and evening than rooftop systems, due to their vertical orientation. Concrete solar modules, invisible cells on windows or solar roof tiles are also on the rise.

Many ideas are not merely theory, but can be turned into reality today. One thing seems certain: solutions are being worked on intensively around the world, to meet the forecast demand for solar energy by 2050.