The energy of the future

Whether electricity from solar or wind energy – climate protection and the energy transition can only succeed with renewable resources. They are one of the global markets of the future. Storage technologies are making great strides and the technology is constantly evolving. This is reflected in current facts and figures on the subject.

Stocking up on renewable energy

Pumped storage, power-to-gas methods or concrete spheres sunk into the sea to store electricity from offshore wind turbines: new electricity storage technologies are indispensable for a successful energy transition at the local level. They ensure that wind and solar power is available even when there is no wind and no sunshine. So hospitals aren't stuck without electricity and piglet farms will still have ventilation. On the other hand, not all options for alternative generation have been exhausted yet. Keyword: building-integrated photovoltaics: Façades that could function as solar power plants are abundant in our cities. California is setting a good example and was the first US state to impose a solar requirement. The California Energy Commission passed the regulation that from 1 January 2020 all newly constructed residential buildings must have a photovoltaic system on the roof or façade. The two functions of electricity production and storage can also be combined with building-integrated photovoltaics. Building by building, the city of the future will become more energy self-sufficient. 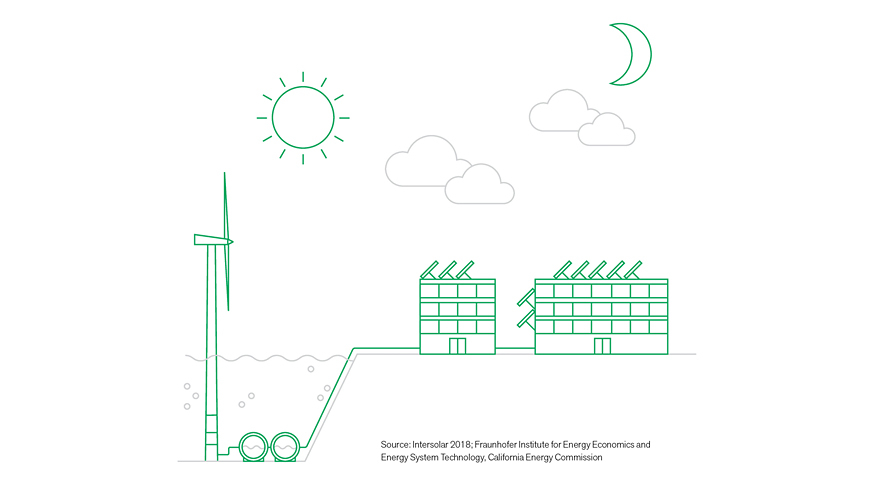 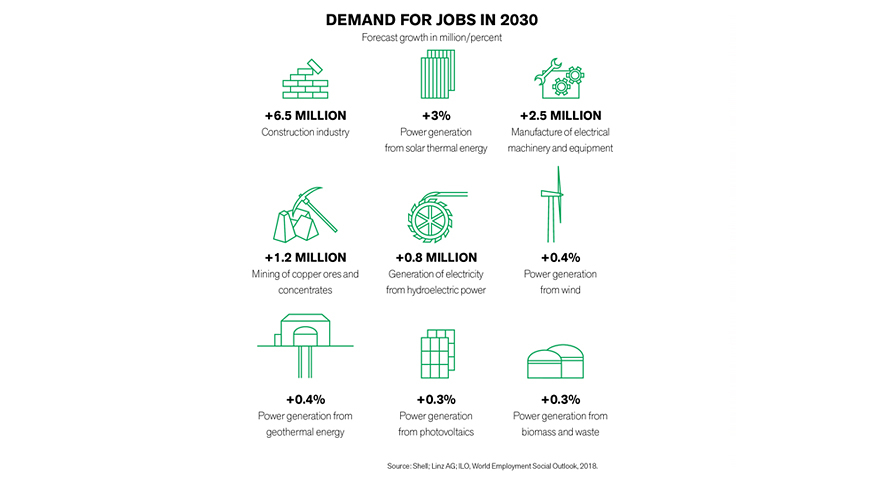 Climate protection as a job driver

The city of the future is characterised by an environmentally friendly energy supply and mobility of its inhabitants. Innovative ideas point the way: on a football pitch in Rio de Janeiro, children can play football in the evenings even if it's already dark. It's illuminated by six floodlights. So what's the innovation? Well, the electricity is generated by the children themselves, with every step they take. More than 200 kinetic panels are installed under the pitch and generate seven watts each time they are pressed. A second example can be found in Linz, which is home to Europe's first electric fire engine. In the future, these and other developments will make the world's major cities climate-friendly.
Another positive effect is that as a result of the energy transition and international efforts to limit global warming to below 2 degrees Celsius over the course of the century, 18 million new jobs will be created worldwide in the renewable energies sector by 2030. This is according to predictions by the International Labour Organization (ILO) in its latest report. The greatest potential lies in the areas of electricity production, electromobility and the energy efficiency of buildings. Most new jobs will be created in Asia, North and South America and Europe. The chart shows an overview of the winning industries.

The green construction sector has experienced a real boom against the backdrop of increasing demands on the energy efficiency of buildings and stricter climate protection regulations. The European market volume in this sector is expected to reach 140 billion euros by 2020. Patent applications in the field of green construction technologies have tripled in just over ten years (see infographic).

True green construction – i.e. zero-energy buildings and beyond – will only be achieved if a building is not only extremely efficient, but also produces enough electricity to meet its own needs and feed surplus energy into the grid. Promising technologies in this regard can be found in solar and wind energy. Various innovations are helping to integrate these technologies into buildings. One spectacular example of the clever use of solar and wind energy is the renovated CIS Tower in Manchester, England. Its outer shell of photovoltaic cells can generate 180,000 kilowatt hours of electricity per year; the building also has two dozen wind turbines that cover about one tenth of its energy needs. 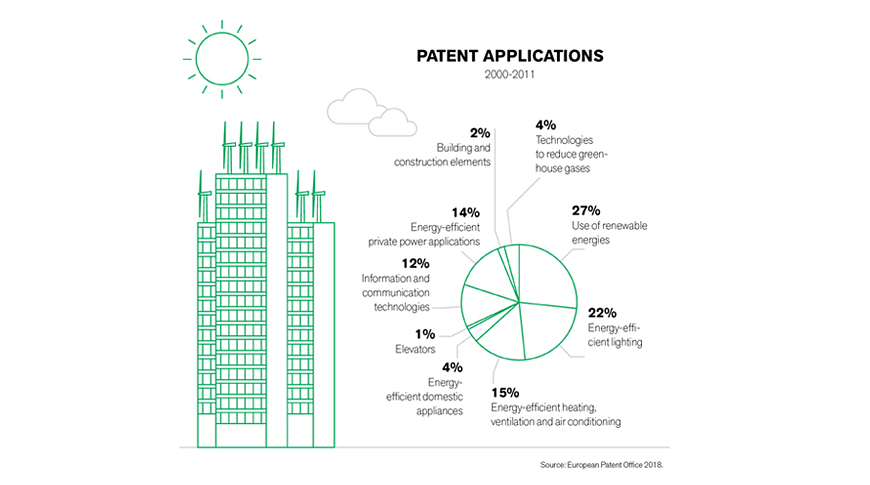 The winds of change